Hottest tech skills to hire for in 2020

The benefits of honing technical skills go far beyond the Information Technology industry. Strong tech skills are essential in today’s changing world, and if your employees consistently and proactively enhance their IT skills, you will help them improve both personally and professionally. This, in turn, will help your business grow.

Yes, it may feel overwhelming. However, with the right attitude and flexibility of mind, it can also be a tremendous opportunity for your employees to learn and grow. Here are some of the hottest tech skills (a mix of programming languages, tools, and frameworks; in random order) to hire for in 2020, which will help you thrive in the workplace of tomorrow.

JavaScript has been the fastest-growing and the most sought-after programming language for years. It is considered as one of the smartest choices for building interactive web interfaces as all modern browsers support JavaScript.

The Stack Overflow developer survey results show that about 69.7% of 90,000 professional developers stated JavaScript is the most commonly used programming language. The same survey reveals that JavaScript is one of the most desired languages. This means that 17.8% of respondents have not yet used it but want to learn it.

The language is at the heart of several prominent tech companies, such as Netflix, PayPal, Groupon, LinkedIn, and Walmart. Additionally, studies reveal that JavaScript is among the most in-demand programming language used in the top privately-held startups valued at over $1 billion in the US. Hence, JavaScript will remain one of the hottest tech skills in 2020 and it is unlikely that it will go off the grid in the near future.

Some of the common job roles requiring JavaScript as a skill are:

Released in 1991 and created by Guido van Rossum, Python was and is still extremely relevant for all developers to learn and grow. It is interactive, dynamic, versatile, and remains one of the most relevant languages for the year 2020.

Also, it is one of the most popular programming languages used by the top 25 unicorn companies in the US.

It is an all-time favorite of beginners and experienced developers alike, mainly for its ease of use and simple syntax. Right from programming projects such as data mining and Machine Learning, Python is the most favored programming language.

Also, read The complete guide to hiring a Python developer.

Some of the common job roles requiring Python as a skill are:

It is no surprise to see Java as one of the hottest tech skills to hire for in 2020. Introduced in 1991 by James Gosling, Mike Sheridan, and Patrick Naughton, it is a robust, general-purpose programming language that is object-oriented and class-based. It was designed in such a way that it is easy to use, write, compile, debug, and learn, and have as few implementation dependencies as possible.

Studies reveal that Java is one of the most popular programming languages used by developers.

This can be attributed to the fact that Java is widely used in industries such as financial services, Big Data, stock market, banking, retail, and Android. It is present everywhere! Whichever domain a developer works in, he/she will surely come across Java Programming.

An article by the Dev Community speaks about how Java is unarguably one of the most popular programming languages in the world today and how tech giants are using the language to build large portions of their infrastructure and backend services. 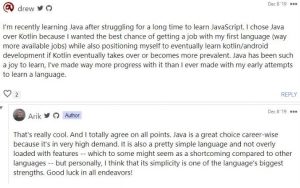 Also, read The complete guide to hiring a Java developer.

Some of the common job roles requiring Java as a skill are:

For the fourth year in a row, Rust has been voted as the most loved programming language in a StackOverflow report, followed by Python. This meant that more developers want to continue working with Rust than other languages.

Also, as shown by Google Trends, Rust has been gaining tremendous popularity over the years and its adoption is expected to grow.

Tech companies like Google, Amazon, and Microsoft have invested in Rust as a long term system programming language because it is expected to replace a lot of C and C++ development. In fact, PyPl has ranked Rust 18th in the Popularity of Programming Language Index, with an upward trend.

It makes a little more sense when you find out that the language was created at Mozilla, giving web developers a chance to write code that’s more performant than Ruby, PHP, JavaScript, or Python.

Some of the common jobs requiring Rust as a tech skill are:

Released in 2013, ReactJS is essentially a front-end library created by Facebook for building user interfaces. It serves as an excellent tool for the development of full-scale, dynamic applications.

As per a Stack Overflow report, ReactJS is the most wanted and most loved web framework. 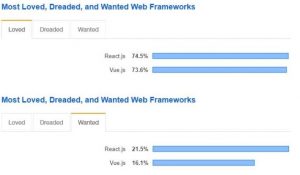 A great performance benefit of ReactJS is its ability to update virtual DOM. As Virtual DOM is rendered from the server-side as well as the client-side, it offers a high-performance rendering of complex user interfaces. This is why ReactJS is fast. Other than Facebook and Instagram, ReactJS is adopted by the BBC, Netflix, and PayPal.

Some of the common job roles requiring ReactJS as a skill are:

Docker is a tool that creates, deploys, and runs applications within containers. 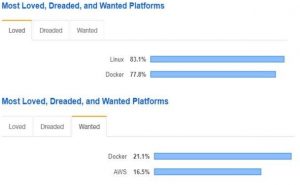 With cloud and Docker becoming significantly linked every day, the demand is only expected to grow. Therefore, if your employees want a wonderful future in DevOps in 2020, they need to have a strong understanding of Docker tools.

Some of the common job roles requiring Docker as a skill are:

There would be no Data Science in Python without NumPy and Pandas (this is also one of the reasons why Python has become widely popular in Data Science.) As per GitHub, among the most popular public repositories labeled with topics like “Deep Learning,” “Natural Language Processing,” and “Machine Learning,” over half of them are built on NumPy. Pandas is a widely used tool, particularly in data munging and wrangling. It is available for everyone as an open-source, free-to-use project. Hence, NumPy and Pandas are expected to be in the race of tech skills to hire for in 2020.

Some of the common job roles requiring NumPy and Pandas as skills are:

Kotlin was designed to be interoperable with Java which makes Android development faster and enjoyable. Also, Kotlin addresses the major issues that surface in Java. Hence, several Java apps are rewritten in Kotlin. Brands like Pinterest and Coursera have already moved to Kotlin due to its strong tooling support. It receives a lot of interest from developers and companies alike. The job postings for Kotlin increased over 15X, from the second quarter of 2016 to the second quarter of 2018, and the trend is only expected to grow.

Hence, Kotlin is a hot tech skill that programmers and Android app developers should learn in 2020.

Some of the common job roles requiring Kotlin as a skill are:

Django is one of the most versatile and popular Python web frameworks that encourages rapid development and pragmatic, clean design of web applications. This can be attributed to Django’s open-source nature—the community is constantly releasing new code and plug-ins to simplify the process and keep up with the demand. It grabbed eyeballs right from the start when it was positioned as Python’s answer to Rails.

Many Python development services, as well as major companies such as Spotify and YouTube, use Django. Developers describe it as “batteries included”, which means that it comes with a variety of third-party libraries.

Django’s user base is expected to grow as more developers embrace Python for emerging technologies such as Machine Learning and Big Data. It is ridiculously fast, reassuringly secure, and exceedingly scalable.

Note: We recommend using the latest version of Django, which is currently 3.0.2.

Some of the common job roles requiring Django as a skill are:

All developers have a thirst for learning new skills. However, knowing which skills are gaining popularity can ensure better career growth and help developers prioritize learning them first. Recruiters and developers can use the information shared in this post to make informed decisions in this matter.

As a recruiter, you need to keep yourself abreast of the above-mentioned skills to stay ahead of your competitors in hiring stellar talent.

Not sure about how to assess technical skills? HackerEarth provides accurate technical screening and helps you hire the best. Start your 14-day free trial today.

The post Hottest tech skills to hire for in 2020 appeared first on HackerEarth Blog.